The menopause remains one of the last taboos, a subject that is rarely discussed, poorly understood, and inadequately funded. This is surprising given that 51 percent of the world population is female and will experience menopause in their lifetime.

But while ever this natural part of life continues to be censored – and the debilitating symptoms snubbed by medical professionals and employers – more and more women will suffer in silence.

Women may joke that menopause is the older, surlier sister of puberty and reproduction (with a drier sense of humour), but the transition into the climacteric stage is an inevitable part of the ageing process. We can’t hide from it, though most women would run a mile from it if they could.

Despite this, unspoken sex and gender bias still exists in modern medicine. Education surrounding menopause is negligible and it is not a mandatory module in medical school training, creating a knowledge gap between GPs and other healthcare professionals.

This is leaving the female population at risk of demoralising levels of disparity in the medical care, treatment and support they receive from their primary care providers. The longer the menopause goes undiagnosed and untreated, women are at an increased risk of developing osteoporosis, cardiovascular disease, or urinary incontinence.

NICE guidelines state that if you are over 45 and presenting with any of the 34 typical menopause symptoms, such as not having a period for 12 months or more, your GP should automatically assume and diagnose menopause based on symptoms rather than hormone levels or imaging tests. Of course, women can experience symptoms of menopause before 45; in these instances, guidelines maintain that a follicle-stimulating hormone (FSH) test should be considered.

However, some women are having to jump through hoops to get the natural hormones their bodies need to calm their symptoms – and they are having to pay for this. Many women presenting with symptoms which affect mood are misdiagnosed as having depression and wrongly prescribed anti-depressants. In patients for whom the menopausal hormonal imbalance results in a loss of drive for life or suicidal thoughts, being prescribed HRT can be lifesaving.

Alarmingly, half of women experiencing menopausal or perimenopausal symptoms are being left with no choice but to pay for private healthcare to access the correct support and medication they need to improve their wellbeing after being dismissed by their GPs.

All patients should be given factual, evidence based and non-biased information to enable them to take control of their own health and make an informed choice about their medical pathway. Adopting a patient-led approach would reduce the number of patients, particularly women, whose health concerns continue to be serially ignored, downplayed, unrecognised, or misdiagnosed.

Carolyn Harris, MP for Swansea East, pledged a menopause revolution in June by presenting the Menopause (Support and Services) Bill in the House of Commons. At the end of October, the bill will have a second reading in Parliament.

She was quoted as saying, “For too long, generation after generation of women have been let down, ignored, or simply thrown on the scrap heap as a result of the menopause.”

In this ground-breaking bill, Harris proposes that hormone replacement therapy (HRT) be exempt from prescription charges in England, as it already is in Wales and Scotland. Contraception and pregnancy services are already provided free of charge, so why is this final significant stage of a women’s life faired so differently?

"For once, women need to be put on the top of the agenda."

There is a counter argument that anyone over the age of 60 is already exempt from paying prescription charges. But what about those women who enter the menopause early in their 40s, or those even younger, in their 20s and 30s, for whom the menopause is brought on surgically as a result of treatment for cancer or Addison’s disease. Should those women who enter menopause prematurely each year be forced to pay for HRT for 20, 30 or 40 years of their life?

Removing the prescription fee for HRT would reduce any financial barriers women face, but the bill isn’t just about money. Harris has established an All-Party Parliamentary Group which will be the driving force for changing attitudes and education around menopause. The inquiry will cover a broad range of issues such as workplace policies, medical school training, public health messaging, and school curriculum.

Medical Solicitors welcomes and supports these breakthroughs and hopes that, in the not so distance future, the level of care and support menopausal and perimenopausal women receive improves. If not, and women continue to face inappropriate diagnosis or unreasonable treatment without their informed consent, then it may be the case that we begin to see a rise in women potentially taking litigation against their GPs.

If men started experiencing symptoms, some from their mid-40s, such as becoming more irritable than they usually are, snapping at everybody, suddenly weeping and getting brain fog, feeling very depressed, and unable to make decisions, then perhaps the laws would have changed quicker

What is the menopause anyway?

A natural part of ageing, the menopause is a decline in oestrogen levels which causes menstruation to often become irregular at first and then stop. However, owing to the very wide range of 34 associated symptoms, irregular periods and hot flushes may not always be the first symptoms women have to endure. The menopause usually begins around ages 45-55, but one in 100 women will begin the menopause prematurely i.e., before 40. In Britain, 111,000 women between the ages of 12 and 40 encounter premature menopause. The average age for the menopause to begin is 51, but some women may not start till their mid-60s.

Women undergoing surgical removal of their ovaries (oophorectomy or total hysterectomy) or undergoing cancer treatment which may affect the ovaries, such as radiotherapy or chemotherapy, will abruptly enter the menopause.

Perimenopause is often called the menopausal transition, the time during which your body begins to mark the end of its reproductive stage. During this stage, a woman's oestrogen levels fluctuate and menstrual cycles may lengthen or shorten. Once you've gone through 12 consecutive months without a menstrual period, you've officially reached menopause.

There are 34 symptoms of the menopause and perimenopause. You can find the full list here.

Symptoms can begin months or even years before periods stop and last for many years after the last period. 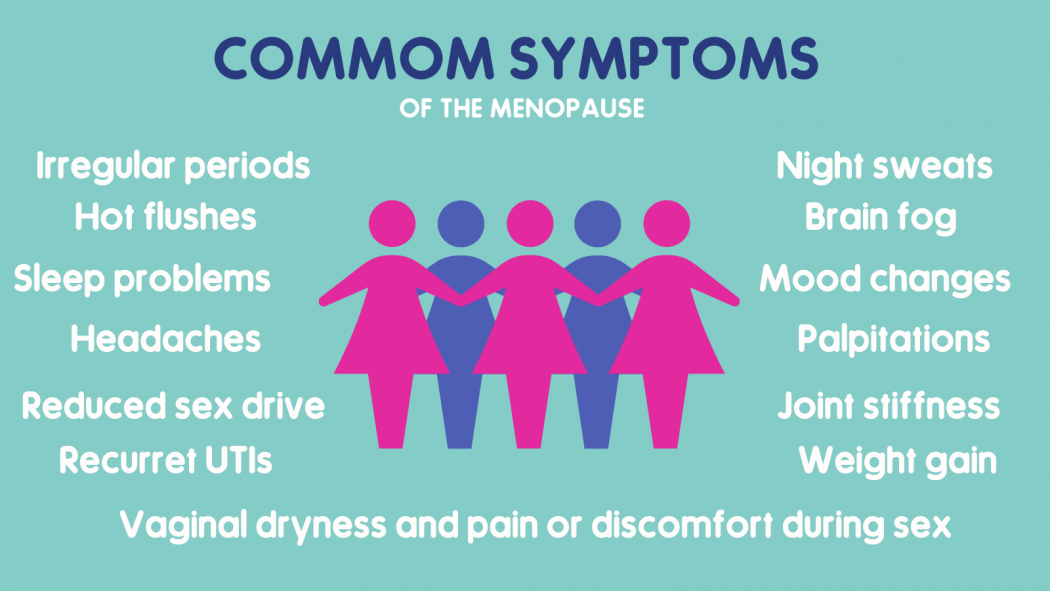 What is HRT and why is it sometimes not given?

The two main hormones that need replacing during menopause are oestrogen and progesterone. Treatment involves taking either both (combined HRT) or oestrogen-only HRT. This may be in the form of tablets, skin patches, oestrogen gel or implants. No other treatment been shown to be as effective in relieving menopause symptoms than HRT.

However, some GPs are reluctant to prescribe HRT because they overestimate the risks and contraindications and underestimate the impact of menopausal symptoms on a woman's quality of life. Some GPs may tell a patient they are too young to be taking HRT. Some doctors may refuse if a woman is still having regular periods. However, perimenopause can happen years before periods stop. Not all GPs attend specialist training in menopause and so some remain uninformed of modern HRT. It is important to make sure your GP is up to date.

Whether because of lack of education or ignorance, so many GPs still tell women HRT always leads to breast or gynaecological cancers. Patients are wholly discouraged from taking it, or ill-advised to only take it for a short while. When in actual fact, if they have no contraindications, such as a family history of breast cancer or DVT, then staying on HRT for a decade can have huge benefits for most women.

As with any medication, there is a balance of benefits and risks. With HRT the chance of developing breast cancer increases. However, this is most often outweighed by the large, long-term benefits it can bring, such as reducing the risk of osteoporosis, osteoarthritis, and cardiovascular disease.

Around 14 percent of women aged between 50-59 use HRT, and a further five percent in both the 40-49 and 60-69 age brackets. These low figures are reputed to be from fear, confusion, or lack of support surrounding HRT. Media reports about HRT have not always been accurate, which has created a sense of fear amongst some women.

If you have been refused HRT by your GP, ask why. You are within your rights to seek a second opinion if you feel you are not being taken seriously. You may prefer to track your symptoms so you have something to show your doctor what your body is going through. You could also consider seeing a different GP at your practice or even change GP practice to find a doctor who takes a specialist interest in this area of medicine.

If you are unsuitable for HRT, or would prefer not to take it, your GP should discuss other options such as non-hormonal medication, complementary therapies, and non-pharmaceutical treatment such as cognitive behavioural therapy (CBT). Whatever pathway you decide, you should have a review after three months followed by annual check-ups. 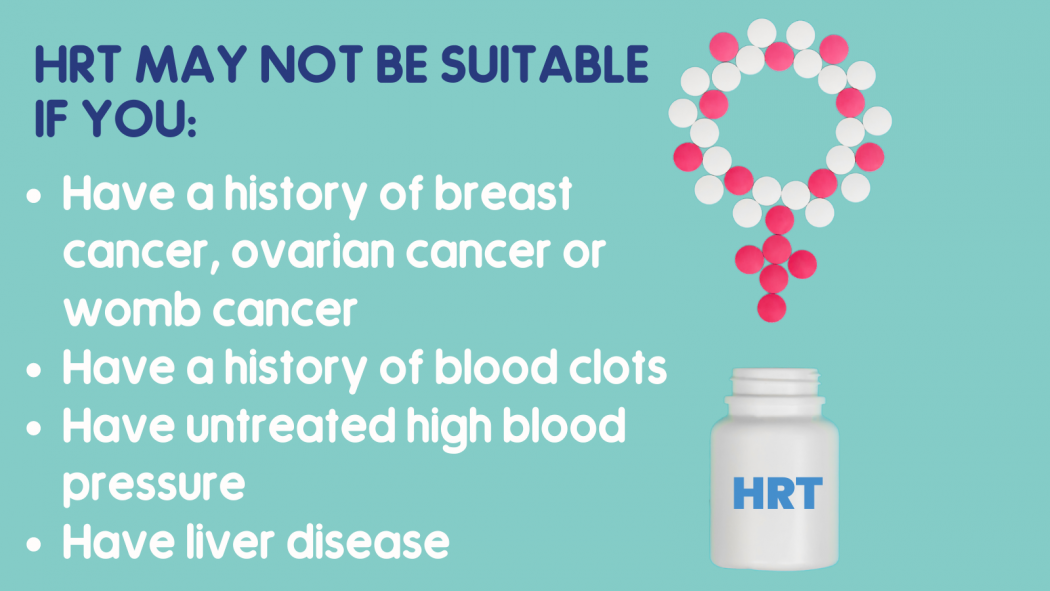 How can employers help women going through the menopause?

Women make up nearly half of the workforce in the UK, yet around 900,000 have quit their jobs because of the menopause. Ability to cope in the workplace is often dramatically impacted by brain fog, memory loss, anxiety, tiredness due to lack of sleep etc. A shocking news report in The Telegraph cited one in eight women quitting their jobs during menopause. But why should women press pause on their careers?

Almost three quarters of female workers of menopause age say they feel unsupported by their employer, with nine in ten feeling unable to talk to their manager or colleagues about their symptoms and how they may be affecting work.

At Medical Solicitors, the majority of our workforce are women, from the managing director to our litigation assistants. We span all ages, so we’re either currently going through it, have made it through the other side, or will face it in the near future. We have a vested interest in the need for a good support network around us, as well as comfortable, flexible working environments.

Health and safety and risk assessments should be taken to look at any factors of a job role which could make menopause symptoms worse, such as not having enough toilet breaks, whether there is drinking water available, or somewhere quiet for staff to rest if necessary. Employers should also take into consideration any absence or performance issues which might be because of menopause symptoms.

Sadly, not every business has a menopause policy in place. However, large corporations are starting to take note. ASOS just announced paid leave and flexible working hours for staff during the menopause, and PwC is to train managers on how to talk to their staff about menopause.

Staff at many companies have even taken to starting their own menopause clinics or groups at which fellow employees can meet to ask for advice from their peers who are going through the same thing.

October is Menopause Awareness Month, with World Menopause Day taking place on October 18th. Use this time to talk to your colleagues, family or friends about the menopause – particularly those who may be experiencing it or have been through it. Ask questions about any health issues they faced and whether they feel/felt supported. By educating ourselves and starting conversations, we can only hope we carve out a more positive future for the next generation of women.

For more support or advice about the menopause:

Our gynaecology expert is

Read about some of our success stories.